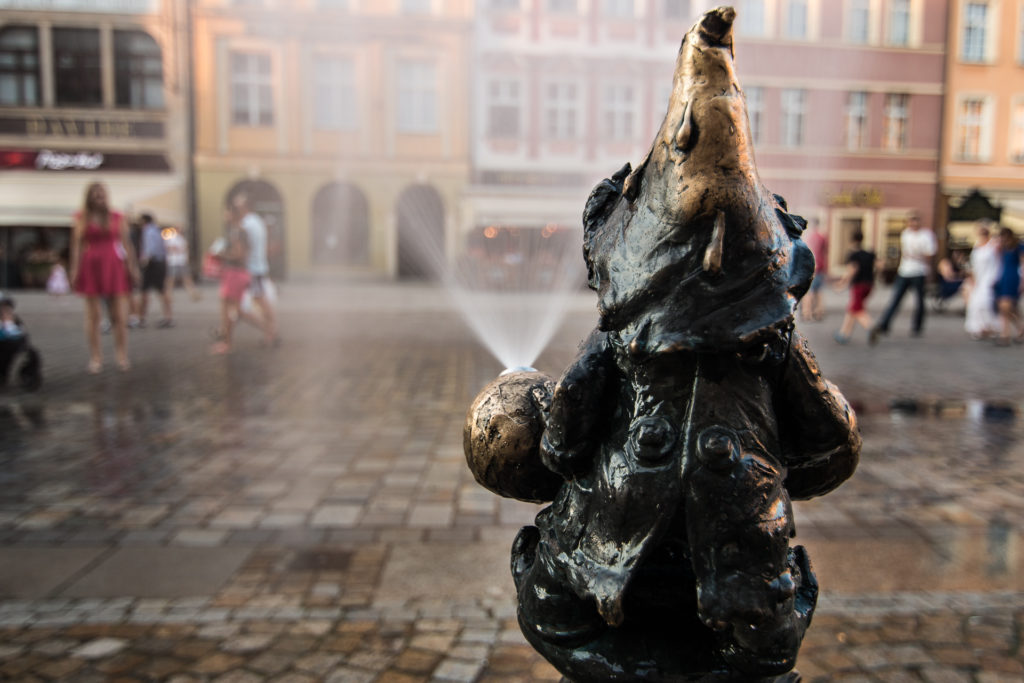 Even though little dwarfs’ statues are quite a new tradition in Wrocław they already are quite a prominent sign of the city. It all started in the 80’ when painted dwarfs were appearing on the city walls as a response to the communist oppression. With those gnomes painted on the walls Orange Alternatives (the main protest movement) was humiliating the government that was trying to cover all the anti-communism writings and limiting the freedom of speech. The statues came much later. The first one called Papa Krasnal (Dad Gnome) was created in 2001 as a monument for the memory of what the Orange Alternative did. On 2005 the first 5 little dwarfs came and since then they have been growing in numbers. Now there are more than 300 gnomes and they are everywhere in the city. There is one eating pierogi (polish dumpling), another one drinking like crazy, even a hippo cleaner and a butcher. They are small enough not to be spotted easily. You have to search for them! And that’s when the fun starts!:) Our favorites below. If you need a little help to find them, we created a map below the post:)

There are two of them and they are by far our favorite ones. Not only are they cute but they bring a lot of joy to the kids and adults, locals and tourists. They sparkle water on hot summer days. They are actually new to the collection because the appeared on the Market Square just in june this year.

Situated in front of a gift shop on the Market Square. He is encouraging people to buy gifts with him on them. By buying it you can help kids with incurable diseases. The Helpy dwarf looks really friendly and is supposed to remind us how important it is to help each other.

Locked on the Wiezienna Street he has been sentenced with uncontrollable apatite. First he was stealing food from the tourists which was not so bad according to other gnomes but then he dared to steal pierogi even from his own kind. Sentenced for social work he was still unable to control his appetite so he ended up as a Prisoner.

There is a whole orchestra of dwarfs practicing outside of the Filharmony. They were unfortunately denied rehearsals inside the building. When we were there they were also imprisoned for a festival. I guess for their own good.

That gnome is in love with Wrocław and its people. He loves tourists as well and he wants to spread his love everywhere. He’s situated just on one of the corners of the Market Square.

He sleeps in front of the Patio Hotel. Probably he got kicked out for snoring and disturbing other guests. But he is still a cute dwarf so at least they gave him a bed.

Otto is a work agency and Ottuś is there every day running to bring his CV. He is very enthusiastic and sure this time he will get a job. Tale says he already got a job abroad. He has only one shoe, probably from all this rush. We also heard that touching his CV brings luck, financially and at work.

By some he is called the Spender because sometimes he disappears to spend all the money that he managed to withdraw. In Wrocław there are a few banking dwarfs but this one is quite special. He doesn’t only have his cash machine but also his own little bank. He can be found in front of BZ WBK bank at the Market Square.

We couldn’t find their names so we gave them our own names:) They are the Modern dwarfs and they don’t care about the tourists or locals they are too busy with their social media, phones, computers and tvs. There are quite a few of those but we chose our favorite two. Both can be spotted in the city center.

How to find them all?

It’s very hard because everyone can buy a dwarf so they grow in numbers quite rapidly. Also when a bank or restaurant moves and they own a gnome, they take him with them. Some of the gnomes also get stolen or they are a victim of vandalism. There is a database, it’s not complete but it’s the best there is. Go to krasnale.pl and you will find a map and some info on the particular dwarfs. 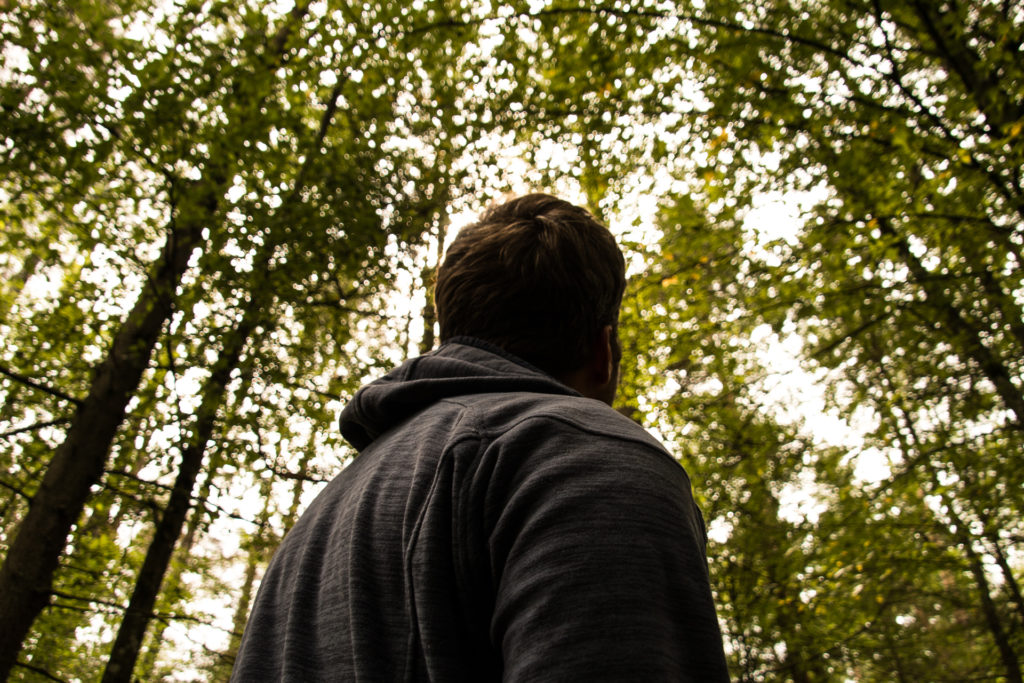 Most of the people come to Białowieża just for one or two days. See the forest and go further. Big mistake, there is plenty to see and do in there. It’s a part of Poland that doesn’t feel like Poland anymore. It’s wilder and the catholic churches are replaced by the orthodox ones and time has stopped. So can youJ

Except for in the Reserve it’s quite easy to spot them in nature. We had really bad luck (that’s what everyone said) and we didn’t see any bison and we devoted many sleepless mornings to search for them. Anyway… The best times to see them is around sunrise and sunset then they are easily spotted close to the border with the Strict Reserve so the restricted part of the forest. If you want to know the exact places that people recommended to us, look on the map below 🙂

If you can choose the season then go in the winter because that’s when the bison get fed so it’s easier to spot them. Good luck! And remember, even if you don’t see a bison, the views will be spectacular.

Strict Reserve is a small part of the Białowieża forest which is extremely protected and nothing can be altered there so when something dies or falls it’s left as it is. We thought forest is forest, but the strict reserve is not just a forest. It’s a different world! It’s just greener, thicker and way more interesting, it even smells different. Not to mention all the weird mushrooms and plants we saw there.

To go to the Strict Reserve you need to have a guide and you can go on tour with a group (144 zl per group so you share the cost, up to 12 people). You can also take a private tour that starts from 280 zl (for polish speaking guide) and you go pretty deep for total of 6 hours walk.

We took the regular group one and we were pretty happy, the guide was really in love with the forest so she would tell us all about the history of it and interesting plants we saw and animals we heard.

The hotel used to be an old train station. Now it’s simply stunning. It’s like you travel in time when you’re there. Everything is maintained so well in the Tsar XXth century era. You can either sleep in your own train wagon furnished Tsar style or you can choose in one of the apartments in a nearby tower. I’m sure the views are breathtaking. You will also have the best restaurant in town just next to you, in an old train station building.

During our stay in Bialowieza we discovered a magical café. It’s called “Walizka” café and it’s filled with suitcases, interesting books, nice pictures of bison and an amazing atmosphere. It’s quite small, just few tables so if it’s busy it’s really worth waiting for your turn. Homemade cakes and delicious coffee will reward it.

It might not be the most spectacular of them all and if you’re going by car you can visit more spectacular ones in other towns but if you never saw an orthodox church and you don’t have a car it’s definitely worth a visit. It’s just such a different experience than the one you would have in a catholic church.

Białowieża is just such a charming, little town and it definetly doesn’t get the attention that it deserves! We really enjoyed just walking around the town, admiring the wooden houses and beautiful forest surrounding.

There are plenty of biking paths around Białowieża that will take you through the forest. I think it’s the best way to explore the surroundings as you are not too fast so you still see a lot but you’re fast enough so that the mosquitos don’t get you. I wouldn’t recommend any route in particular as they are all pretty much the same. Even though some say you need to see “The Trail of Royal Oaks” as it has really huge, old oaks, I would say that one is all about the journey, not so much about destinations. And so are most of the routes.