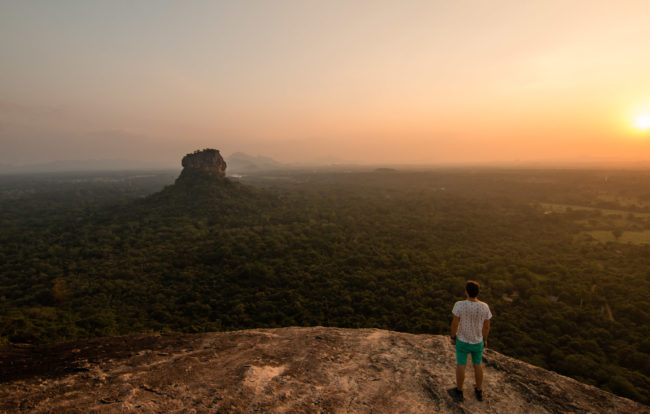 Coming from Oman Sri Lanka was a breath of fresh air to our pockets. Almost everything was cheap and for those who want to lower their standards even further and get cozy with rats it can be even cheaper 🙂

So let´s break it down:)

Starting from Colombo we travelled along the coast stopping in charming villages and towns down to Mirissa. After seeing whales we started going more north to enjoy some tea in Ella, the famous train from Ella to Kandy and finally the cultural triangle. For the last few days of our stay on Sri Lanka we chilled out on the coast close by Colombo.

We wish we could say "safe" but honestly the buses in Sri Lanka were really scary especially along the south coast. Whenever we could we tried to take a train rather than the bus. But on the positive side the transportation of all kind was really cheap and offered really breathtaking views over tea plantations, rice fields, lakes, seaside and whatever you could imagine. Many times we saw elephants from buses and not only passing the temples.

For the famous train passing through tea plantation we paid 800 LKR (around 5 euro)... for both of us. And that was a 7 hour train so probably the most expensive that you can get. It was 3rd class but it was comfortable and we were sitting without a problem.

Buses are a bit more expensive, probably because you pay for the adrenaline shot that you get in there… So a short ride from Kandy to Dambulla costed us 200 LKR (1.2 euro) for us both.

Tuk tuks are obviously the most expensive option except for a private car with a driver of course. They require quite a bit of bargaining skills and patience. Within a city or just outside for a short ride we would pay maybe around 120 LKR (around 75 cents).

In Colombo and surrounding areas along the coast we used UBER which turned out to be cheaper than local tuk tuks. For that price we were expecting a Flintstone-like vehicle but to our surprise we were always picked up by a car.

Overall on transportation we spend a total of 77 euros.

Accommodation was the biggest part of our spending and cost us 557 euro. That said we slept in really few shabby places and we treated ourselves with nicer places to sleep twice. We even rented an apartment which was ridiculously cheap.

Only 4 nights we spent in dormitories not even because we were open to spend extra on private rooms but actually because private rooms were often cheaper than two beds in dorms. For 3000 LKR (around 19 euro) we already had a nice double room with a private bathroom in most cases. For just additional 1000 LKR we stayed in a charming, little cottage with a private terrace overlooking a green, lushy tea region. Rowinrich Cottages was definitely our favorite accommodation where we stayed just for 5 nights. We wanted to stay there forever 😀

Another treat was an Airbnb apartment in Mount Lavinia for 30 USD. It was worth every dollar of that price. We had our own kitchen where JD could cook his amazing curries, great, spacious living room, aircon in the bedroom and a stunning, huge terrace with plenty of trees and plants of many kinds.

On food and eating out we spent a combined 514 euros. The prices of restaurants on Sri Lanka were surprisingly high. In some places especially along the coast we couldn’t find anything that wouldn’t cost us a day in a bathroom, for under 10 euros per plate. Thankfully in many spots we had a kitchen so we just cooked ourselves buying a lot of vegetables, seafood and occasionally meat. Whenever we cooked we were definitely not saving on ingredients of any kind and still it was mostly cheaper than eating out. The only delicious and really economic restaurant was Matey’s hut in Ella where we ate every day. Everything there was prepared fresh with love and passion. Prices were very low and we were leaving happy, full and ready for any adventure for 1000-1500 LKR for both of us (6-9 euros).

On tourism we spend 147 euros. In general entrances to museums, temples and sights were cheap or free BUT in the cultural triangle the prices are just insane. For seeing Sigiriya Rock we paid 9000 LKR (56 euros) for both of us which is just a ridiculous price considering that you’re only visiting ruins on top and bottom of a rock which don't resemble more than few walls…. Honestly we were not even impressed. Well maybe we were stunned by the crowds but that’s it. It would have been a nice trip for 10 dollars but it’s not worth the whole price we paid.

Polonnaruwa ruins which also belong to the cultural triangle cost us 7500 LKR (for both, 47 euros) so also overpriced in our opinion. But those were at least pretty extensive and included many ruins and temples. It was also not that crowded in the morning.

Whale watching tour was surprisingly cheap and we paid just 4000 LKR for the two of us. We were sharing a boat with probably around 30 Chinese people which at times was challenging. All of them were running around from one side of the boat to the other trying to get the best shot of the whales. The boat was swinging like crazy but no one seemed to care except for us.

Many other sights were pretty cheap and our favorite was a temple carved in a rock in Dambulla (free of charge).

Where did the rest of our money go?

Most of our 16 additional euros we spend on mobile internet. For 649 LKR (around 4 euros) we bought a simcard from Dialog together with 4GB data during the day and 5GB data throughout the night time. We put some additional money on the phone to be able to call and text and honestly it was a great investment. The mobile internet was just great and came in very handy in so many situations especially that in some places where we stayed the internet was not really that good or sometimes even non-existent.

Our tips to save money on Sri Lanka