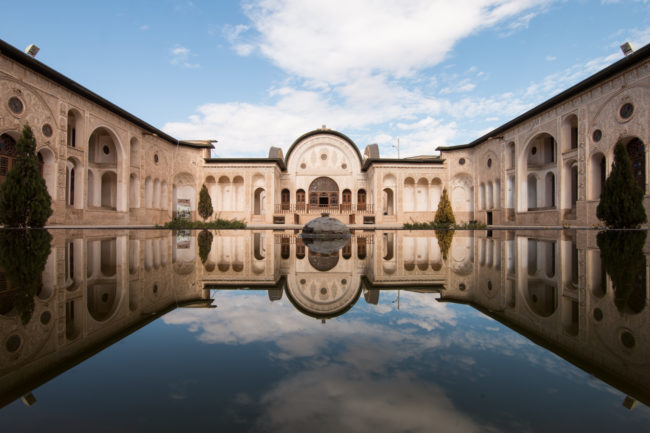 Kashan is a place where most spend just a few hours, it’s an adobe beauty. Well at least the center because honestly getting to any other part of the city is as much of a chaotic nightmare as in any other city in Iran. But once in the center everything changes, the cars have to slow down in the narrow adobe streets and the shadow of the long walls brings relief from the heat of the burning sun.

But first like in every place in Iran we had to find a place to stay. We started walking door to door to every hotel and guesthouse that we have written down. To make it more difficult many of them didn’t even put a sign on the door so each time we felt we were knocking on a private door. The beginnings were difficult but that’s how it goes with bargaining I guess. In one place we heard 60 dollars for a room in an empty hotel. It wasn’t really a negotiable price. They probably figured it’s better to have those very few naïve tourists that are willing to overpay than many that would be tempted by a better price. Finally we heard about Noghli which was our last chance really. Just like all the others it was a charming, adobe house with a big courtyard and a labyrinth of rooms. There the staff was more interested in having clients. With 1 000 000 rials (around 25 euro) we happily checked into our room. Now that I think about it, it was actually the best room we got during the whole stay in Iran. Bright, big, colorful and with a little bathroom. It was all we needed.

Kashan is somehow like a secret garden where you can’t even suspect what’s behind and below the massive, adobe walls. There are no windows to the road and the merchants mansions grow downwards rather than up. Every house is really private and every single one is a big surprise. Most of them are built by very wealthy merchants around the 18 and 19th century. Some unfortunately were left to fade away but some turned into museums or hotels to shine bright and astonish the visitors.

While most of the people only decide to see one or two houses over a few hours stop we decided to take our time. Rolling down a tunnel to get to Abbasiyan house we didn’t even imagine how big of a house can emerge from the adobe walls. Not only did they have a stunning, huge restaurant but also a museum. And they were both really well maintained, renovated and full of finesse patterns on the walls and ceilings. Imagine 6 courtyards, countless rooms and even a ceiling made of tiny mirror pieces that was supposed to imitate stars at night with a little help of candles. Not to mention that the restaurant was our addiction with its traditional Iranian “couches” and delicious food at very affordable prices.

And from there it was just a short way to explore the most spectacular of the houses the Tabatabaei house. We loved it because of the spectacular play of light through the colorful glass of the windows and the perfect reflection in the house’s main courtyard.

But it definitely run short when it comes to complexity of its ceilings. For that we absolutely loved nearby Borujerdi house which had a few of the most spectacular ceilings of Iran. Not only were they colorful but also very geometric and symmetrical. And that created in adobe.

Those three houses were our absolutely favorites that left others very far behind the podium. Some were not as well managed and some were turned into hotels which I’m sure makes it pretty spectacular for the guests (for sure it made it unforgettable for us at Noghli) but for a tourist it limits the exploring to a sneak peak at the main courtyard. For most that’s where Kashan ends really but…

There is more than the houses…

With a bit more time to explore we ended up going to Sultan Amir Ahmad bathhouse in peace and calm astonishment. This 16th century old bath house made us imagine how it must have been to sit here in steam surrounded by rainbow-like tilework to later on cool down in a chilly pool. Except for a labyrinth of passages there is also an impressive roof to see. We definitely enjoyed seeing the city from above, seeing all the wind catchers and having a bit of a sneak peek into some parts of other houses. Not to mention that the roof as such was also quite a sight with all the domes raising from it.

No visit is complete without visiting the Bazaar…

Which in Kashan turned out to be extra special. Surprisingly it was quite calm especially compared to the chaotic, crowded and noisy one in Tehran. Although really quiet it didn’t really miss any of the vibe and certainly didn’t miss any of the architecture. It actually had one of the most beautiful halls we have ever seen surrounded by little, charming shops and cafes, with a little fountain in the middle and of course a stunning ceiling it became our number 1 sight in Kashan. Going back now we wished we could just sit in there with a cup of black tea and stare at the carpets. But well we can’t 🙂

Our hotel was actually very close to Aqa-Bozorg mosque which we visited many times and we really felt that it was one of the most spectacular mosques of Iran by night. When the evening comes and the lights are switched on it’s like a rainbow of colors. And then running kids playing football, old grandpa’s chatting on the stairs make it such a peaceful place to end a day of sightseeing. And it’s for free which makes it even better:)