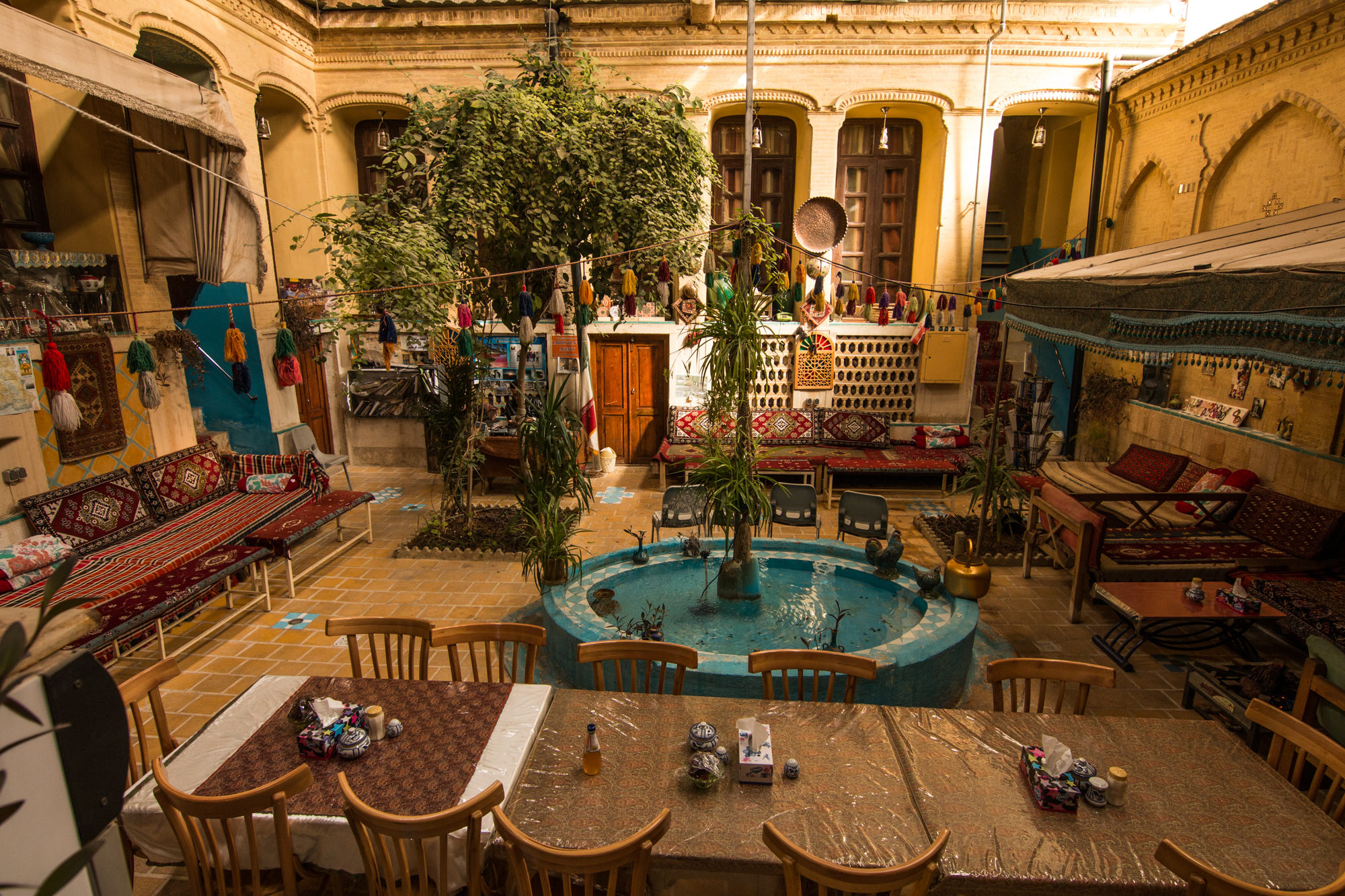 Shiraz ended up being our favorite city in Iran and definitely a city we would recommend for anyone. Even if it was the only city to visit in Iran. Shiraz has it all.

Bargaining skills and patience is the limit :). There are many charming, traditional houses around the city center and some of them are open for bargaining. We came to Shiraz in the evening, tired and dirty so our patience was a bit low. We visited 3 places and after in the last the staff asked “if the price was really that important”, we thought that the next place just had to be a score. Thankfully it was. Golshan Traditional hostel was all we were looking for. Beautiful courtyard, neat room, friendly staff and an owner who knows how to bargain. From there our journey in and out of Shiraz started.

It’s the mosque we saw in every guide book, on every web page and every list. We knew skipping it would be not seeing the Eiffel Tower in Paris. The color patterns created on the floor by rays of sun creeping through stained glass windows made it the number one attraction in Iran.

Before our staff even woke up, before most tourist would even think to wake up, we were already there. To our surprise we were not the only ones and the hall was actually much smaller than we thought. I guess wide angle lenses did a good job on all these pictures we have seen. For Iran it was really rather crowded in there. All the people were posing to replicate all the shots they have already seen so many times. Selfie sticks were flying everywhere and tripods were just on every corner. Disappointed we went outside and discovered that the courtyard was actually way nicer. Empty, underappreciated, it was all for us. In the pond the reflection of the whole facade was just stunning, not to mention the play of colors. Pink, purple and a bit of blue, the colors we have seen so much all over the place. But only inside… The country of boring outsides and mosaic, playful insides.

The most “different” of them all, Vakil mosque except for the traditional courtyard and facades has a massive hall with 48 pillars. Although build in 18th century, it was given the finesse of floral tiles by Qajar dynasty in the 19th century. Actually the most spectacular sites we saw were either built or given this extra touch in the same period.

Iranians don’t speak Arabic and they definitely don’t identify themselves as Arabs. If mistaken they are probably as offended as a Dutch taken for a German. To see the magnitude and the power of the Empire we went to Persepolis and Necropolis. It was probably the only sight that we knew about when we previously thought about Iran and we were rather surprised that it didn’t attract the crowds that much. We could wonder around for hours to discover every corner of what once used to be a ceremonial capital without big groups unloaded from buses.

Even today the preservation of columns, stone work and massive tombs is just breathtaking. No wonder Iranians are very proud of that period. They had the power, they actually proudly paid to all of their workers and they included all of the conquered nations in sculptures and in the Gate of All Nations. Very smart idea to keep all the people happy and in peace.

The best about this trip was that we met the coolest people that started as our guides and ended up as friends. Ramin and Sadegh were just the friendliest people we met in the whole country and we were actually disappointed and skeptical about Iranians when we met them… Which I didn’t really hold back from them when they asked how we liked their country. We had so much fun that it wasn’t the only time we saw them…

When I saw that lake during my research about Iran I immediately knew we would have to see it. It was deeply pink because of algae so it was supposed to be seasonal. Ramin and Sadegh didn’t think it was anything spectacular but they were open to do something and I can be very persistent. And so on the next day we planned a picnic. Ramin took the whole house with him… literally, plates, gas pit, a saucepan, bread, eggs. Like if we were going camping for multiple days. We arrived at the lake… and wait, there was no lake. Drought took all the water away and it turned into a salt flat. “Look here it’s pinkish, the lake would have been pink, if there was water…” explained Ramin. Walking further we discovered that there was a thin layer of water creating unbelievable reflections. Just like we saw on pictures of the salt flats in Bolivia, during rainy season. We missed it there and got it by a surprise here. It was our best day in Iran. The posing, the playing with the reflection, the colors of the sun going down. And Ramin trying to always stand a bit different than JD and Sadegh.

In the evening the place turned into a bit of a party spot, where all the locals came from Shiraz to play music, smoke shisha and do all the things they couldn’t do back in the city. Where there is no police, a new side of the country shows up. And boy it’s loud 🙂

Mosaic tombs of the poets…

When Ramin and Sadegh took us to see our first tomb (Saddi’s tomb) we were just too polite to convince them that it just can’t be special. It would only be a grave …right? Well not here. I don’t know any country where poetry would be as alive as here. There were people reading poems out loud, singing (possibly poems:D) and the atmosphere and crowds were unbelievable. The grave itself reminded me more of Napoleon’s tomb in Paris then just a grave of someone famous at the cemetery. It was a whole complex of rooms surrounded by gardens and fountains. And so was Hafez’s tomb as well. Who would have thought that a place of resting for someone can be a place of joy for someone else?

We ate so well in Shiraz that I actually get hungry even thinking about it. Quite far from our hostel we discovered a very chic neighborhood packed with good restaurants and hip cafes. Our top choice was Qavam Café and restaurant that served delicious traditional food. Especially their dizi has stolen our hearts and stomachs. Dizi is a stew that after a long period of cooking in the oven gets separated creating a tomato soup and solids that are later smashed to create kind of a dip. The whole process was a pleasure to watch and eating it was just a whole lot better. To think that we only ended up eating there after we got denied a table at another restaurant that was only accepting locals…

You would think that because of the “café” part Qavam would be good in desserts but that’s not the case. They have a very, very sweet date option but we just didn’t want any more dates at some point. Walking around, craving for something different we came across Café Ferdowsi where we went back to Europe for a bit. The design itself with a bohemian, recycled theme was one thing but the selection of cakes and coffee was just to die for. Literally since getting a portion of caffeine that tastes good is an achievement on its own in the country of absolute tea.