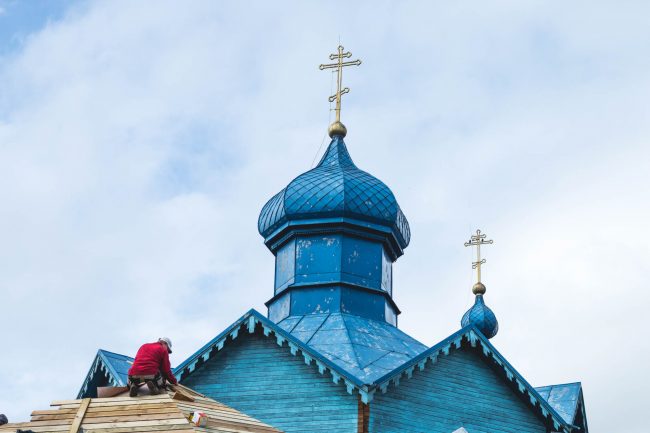 Back in 2016 we went to Białowieża for the first time. On the bus there we spotted stunning wooden houses, colorful orthodox churches and an almighty forest. Afterall the region is called Podlasie which could be translated to “under, near forest”. Already then, we decided that we would come back someday with a car to be able to explore it properly. That occasion came sooner than expected…

Our journey started in Warsaw where we rented the car, that was the most efficient and the cheapest way to approach our road trip. Later on we drove to Białowieża. We wanted to stay at Carska hotel and be as close as possible to the primeval forest. Białowieski National Park is an absolute must see and one of the very few untouched forests in Europe. It’s also a house for lots of wild animals. The most famous one is the bison. But we have already written a post about things you absolutely need to do around Białowieża.

This time I would really like to focus on other highlights Podlasie has to offer.

Poland is not a very multi-culti country, there are not many foreigners who live here. The same goes for religion, the crushing majority is Roman Catholic. In recent years that faith has been stronger then ever. Not going into politics… it’s extraordinary to see some variety in Poland, communities with their own faith and customs. Like Tatar settlements live in two tiny, tiny villages Bohoniki and Kruszyniany. We visited the second one and it left us speechless. It’s one of those experiences worth travelling for… even though the path there was quite rough and we thought we left paved roads forever.

Tatar history in that region dates to the XVII century when they were recruited as warriors to fight for our king. Afterwards they gained land and other professions. Nowadays they speak polish, but they keep their religion- Islam. It’s unbelievable that in a small village with just a few houses different faiths can co-exist. They even have their wooden mosque, where they gather few days a year. It’s possible to visit it and hear a story from one of the Tatars about their history, bond with Poland and their customs. It’s interesting and we would highly recommend it. The guide there will tell you passionately even about his marriage with a Polish woman, faith of their kids and local goodies. Talking about food… While there you CAN’T miss the Tatar restaurant on the other side of the road. It looks cheesy to the point that we seriously considered leaving the village and drive somewhere else. But we were so hungry that we decided to give it a chance. Sitting there at one of the plastic tables and observing dishes served on plastic plates we were wondering if we made the right decision. And then my coffee came… it was like if we were back in Oman. The coffee was intense, rich in smell and flavor. I could taste the cardamom straight away. I was intrigued. Then we got their layered savory cake with turkey and their traditional dumplings filled with beef and served in broth. Heaven. We could taste the love, the hours of hard work and the complexity of those dishes. It was better then any restaurant in Białowieża and we went to the best ones (supposedly). It was as if Poland met Iran and made the best menu possible. It gets even better… those goodies cost from 10 – 39 zl (2-9 eur).

They made us forget that we were still in Poland. They are the most prominent buildings in the whole region. Maybe it’s because we both haven’t seen one before, but they all seemed so different and so fascinating. Some of them were blue, some green, some “just wooden”, we spotted quite many with rich-looking golden ornaments.

Our favorite ones were in Trześcianka (green one), Puchły (blue one) and Narew (another blue one). Unfortunately, only the one in Puchły was open to the public, all the rest that we saw were closed.

It’s worth reading a bit about the differences between Roman and Orthodox churches. Unfortunately, the guy who worked in the only open one was not keen on sharing information. He was much more interested if people were married or not and if they had kids. If someone answered no to these questions he would be very unsatisfied and unpleasant so better to keep your mouth shut.

The Land of Open Shutters

That’s the name of a collective of three small villages (Soce, Trześcianka and Puchły). Their name is a tribute to their exceptionally well-preserved wooden architecture, especially their shutters. It’s also an attempt to maintain them and keep the traditions alive. It’s a very rural area so many farmers opt for a modern, more efficient way of building/restoring the house instead of taking care of the wooden beauties they have. It’s hard to blame them since it’s probably difficult and pricey.

Thankfully those three spots still manage to keep the past alive. They not only have colorful, open shutters in all the shapes and forms but also carved, wooden ornaments on the facade of the house to go with them. Together with flowers, small farms and dirt roads it creates a very cozy, rural feeling.

How to get to those places?

A car is a necessity! The interesting spots are quite far from each other and we haven’t seen any buses connecting those. Bah! To some there isn’t even a paved road. A plus is that you’re most definitely “off the beaten track”. Podlasie isn't a popular destination so you can be almost certain to explore everything without a fear of crowds.

We rented our car via Pepe Car, we literally took the cheapest option which cost us 10 EUR per day plus 4.60 EUR per day for an extra driver.