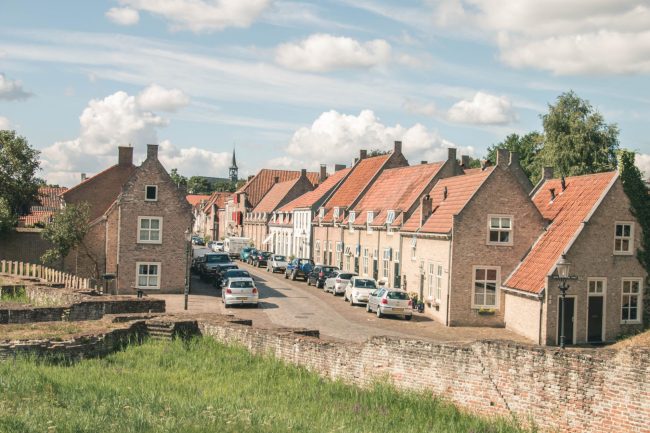 Mostly we choose a destination because there is something interesting to see or do in there. Scrolling through B&Bs on bedandbreakfast.nl I decided to change that approach. What if we chose an accommodation to be our prime destination? Sounds like not a bad idea for a country of unstable weather. And aren’t cute hotels located in beautiful places anyway?

That’s how we got to discover Heusden in the southern part of Holland. After a little bit of research it turned out it was a fortified town which already promised at least some history. Underwhelming pictures on google could just mean two things: either this tiny city was not a tourist attraction or there was not that much to take pictures of… Either way, enchanted by the potentially stunning B&B we decided to give it a chance.

Heusdens Logement is situated in an impressive XIX century house just a short walk away from the main square. It offers only 3 rooms so it’s really homie and cozy. The only thing that it would have in common with a hotel would be… impeccable style. The whole house is beautifully furnished with unique antiques, all of which were gathered by the owners. Every little detail is thought through, there are flowers on the table, paintings on the walls and even the doorbell is unique... good that JD knew which part of it we had to pull on.

The house ticked something off my bucket list- sleeping in a typical Dutch house. Nothing compares to waking up with those magnificent, massive windows with a great view on the street. Or at least that’s what I thought before I got the chance to relax in a bath looking out through equally grand windows in a bathroom as big as half of our apartment…

As you can imagine the B&B was a 10 out of 10 experience. But how about the town itself?

It reminded us a bit of Naarden, close by Amsterdam. The walls that used to protect and surrounded the city are now overgrown by vegetation and inviting for a stroll with views on the town. The center itself is small but big enough to provide restaurants, cafes and shops for the weekend. Just next to the harbor there are also three windmills. Although they were built in the 70's, they don’t look modern at all. No one who loves Holland for its windmills will be disappointed. Except maybe for a small detail… they no longer work. Every now and then the blades turn just to please the eye.

Heusden is not really famous for anything, nor has it got any of “the biggest” or “the best” so we don’t mention any local attractions. But that doesn’t mean it’s not worth visiting. We loved it for the atmosphere of enjoyment. It seemed to us everyone had time there, time to relax, sip some beer on a terrace, talk. We enjoyed strolling through those lovely streets and most of all we loved the peace. The importance of the last one is often underappreciated. We really liked not having a whole list of things to see for once and we would really recommend it to any busy bee out there.

How to get to Heusden?

It’s easy to get there with public transport. First you have to go from Amsterdam Central Station by train to Den Bosch. Later on you have to take a bus nr 135 that will take you straight to Heusden. All in all it takes a bit under 2 hours to get there.