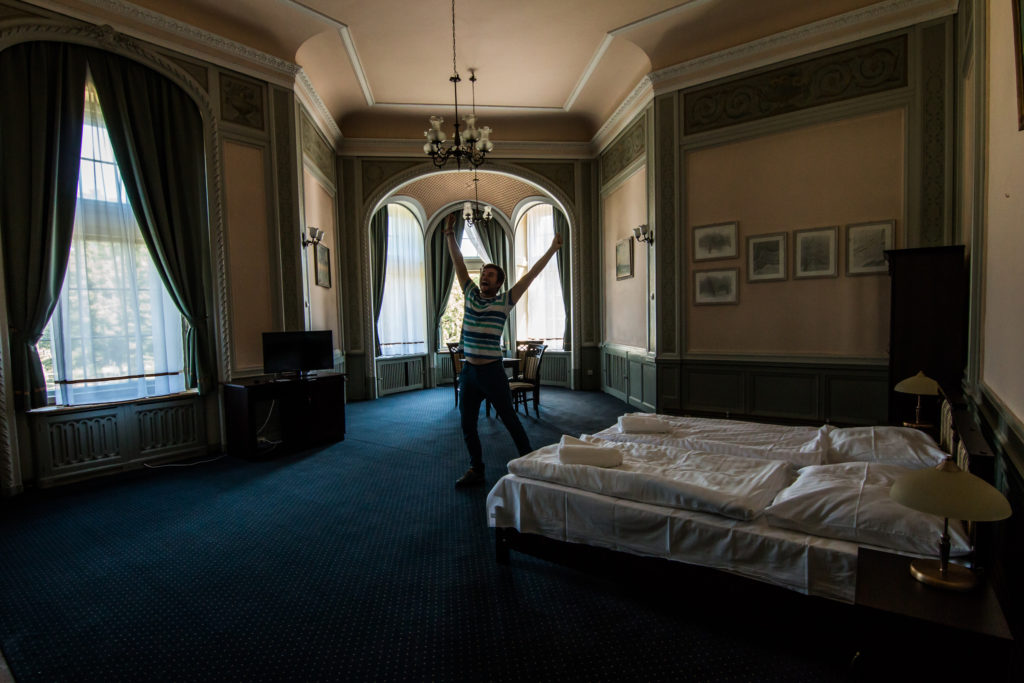 History has not been kind to Moszna Castle… It was build (as it is right now) between late XIX and early XX century. After World War II it was occupied by the Red Army. Especially then a lot was damaged and even more was stolen. The Soviets decided to use a tiny chapel as a horse stable just to show their hate for the religion. Which can be seen even now on the stairs from the chapel. Later the Castle was a mental hospital for over 40 years up till 2013. Now finally it is a museum, restaurant and a hotel.

It was always my dream to sleep in a castle. I guess it’s a dream every little girl has and well maybe I still am one. Not to mention Moszna is supposed to be one of the most beautiful castles in Poland. It’s a bit of a weird place when you look at it closely. Every wing represents a different style but somehow they go really well together.  I thought sleeping there would be a budget breaker for us but I always check things like that just in case… And it turns out a night there starts from 150 zl per room… too cheap to be true?

We just couldn’t resist the chance and we decided to take the cheapest room and check it out. It was supposed to be just a double room with a bathroom on the corridor. We hope the corridor wouldn’t be too long. Arriving we are shocked. So not only the bathroom is private and just next to our room but tickets to the sightseeing of the castle are included in the 150 zl for the room. In disbelief we walk to our room and when we open the door we are amazed… We thought we would get the servants room somewhere on the roof or in the basement. Nothing like that. The room is enormous. We could play hide and seek in here. And it’s beautiful, all kept in style. Not to mention we have a view on the huge garden with a fountain and on the entrance to the castle. As I look outside of the window I see 4 newlywed couples on their wedding session. It looks hilarious as they all try to have the most amazing pictures with the castle but without the other couples in the frame. On our way to see the castle I comment that to the receptionist who tells me that’s nothing. One time they had 17 couples. That must have been entertaining.

As we go through the castle on sightseeing we kind of imagine how it was a mental hospital. Those long, endless corridors and tiles in some places are a bit creepy. And it’s not popular so the emptiness gives it the extra spookiness. But on the other hand it looks a bit like a fairytale castle with its 99 towers, 365 rooms and charming café and restaurant. Both serving good and not too expensive food.

Moszna castle is like another dream coming true for us. It’s relaxing, soothing and peaceful. The garden is amazing as well, perfect to picnic, read a book, walk around, stare at couples taking their wedding pictures.

For the receptionist I assume we are more of a nightmare really. Especially when we ask her to open the door before the sunrise because we absolutely have to take a picture of the castle…

How to get there from Wrocław?

First you need to take a train from Wrocław Główny to Opole and then from over there a bus to Moszna. The whole route with timetable you can check on e-podroznik.pl. I know it sounds very polish but it is in English.

Cheapest room is 150 zl per night. And that includes a huge breakfast consisting of absolutely everything: lots of fruit, granola, yogurt, sausage, eggs, ham, cheese, bread of all kind and much much more. Except for the breakfast it also includes visiting the castle. You only need to pay if you want to see the towers but you have a discount even for that so it’s 6 zl per person. On weekends Moszna Castle organizes other kinds of sightseeing or parties. To check it out and to check out all the other rooms and the restaurant menu go to http://www.moszna-zamek.pl/ . May google translate be with you 🙂 You have to call them or write them an email to reserve.