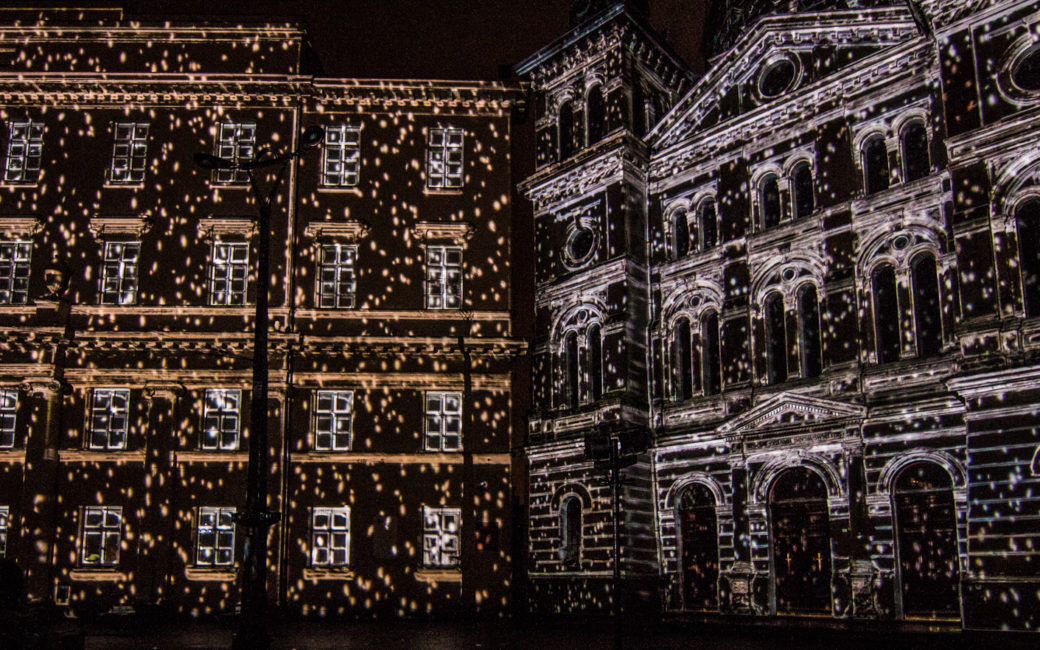 Łódź is famous in Poland for its film academy. Almost all the people that matter in the business pass through that school. Although for many years people went there not for pleasure but for must, now it’s been changing. It’s becoming more and more a bit of a hip city full of young life and creativity. It’s also a very good one day trip from Poznań or Warsaw as it’s just around 2hrs away. Why to visit Łódź?

Visiting Łódź Light Move Festival in October we found ourselves in the world of dreams and nightmares as that was the theme this year. There were installations in parks, 2D/3D mappings, light tram, virtual reality and surprisingly not that many people. Maybe because the festival is still quite small and focused just around the main street of the city. Still very much worth a trip to see it. To make it easy you can download an app android IOS which gives you access to the whole map so that you won’t miss anything.

Manufaktura as it is now, is a result of one of the biggest renovation projects in Poland. Previously in the 19th century it was a flourishing series of factories producing various textiles. It was bought in 2000, when its best years were far behind, by a French developer. It took 6 years to bring it back to life. Fortunately the most important and prominent part is still the original factory building, red brick with big windows. The complex is truly huge with a big square in the middle. That’s where most of the life happens in Łódź, there are concerts, cultural events and even an artificial beach in the summer.

Before coming to Łódź we really thought Wrocław would be the capital of street art in Poland. Well not anymore. Łódź surprised us with numerous pieces of art spread all over the city. There are masterpieces everywhere: on a side of an awful communist block, by the pedestrian crossing in the center and even above a parking lot. It makes this fairly grey city way more colorful, fun, artistic and interesting. Our favorite one was definitely a mural of a famous Polish pianist Artur Rubenstein who playfully stares at the pedestrians. Detailed map of all the amazing murals you can find on the web page of the street art foundation. If you want to see all the pictures first you can check them out on their facebook. (The murals below are included on the map)

As usual when something becomes really popular it becomes a bit outdated for the cool ones. So Manufaktura is not a place to be if you want to be cool. For great cafes, artistic shops and restaurants you have to go to OFF Piotrowska. It was built in the late 19th century as a fabric factory and I would say it wasn’t that much renovated before it opened as a cultural underground in 2011. The windows of the upper part of the complex are broken and it’s all a bit rustic and honestly that’s the charm of it. Going there we felt that it was something real and special… more than Manufaktura. We strongly recommend Drukarnia, it’s a stunning place for lunch, dinner or drinks where you can just sit and relax watching people pass by through the huge industrial windows. It definitely doesn’t hurt that all the people working there smile and seem to enjoy a nice talk and their job.

Since 2015 Łódź is very proud of its brand new tram stop that some of them call a “unicorn stable”. Its roof is made of a colorful, almost rainbow-like membrane that’s supposed to imitate more dangerous stained-glass. The effect is quite unbelieve and looking from a distance we got an impression that it almost looked like a part of a cathedral with its high ceiling, colors and arches.

180 000 graves ... That’s probably our biggest regret. We were just not in a mindset to visit a cemetery but we strongly recommend it. It’s such a big part of Polish history. In the south you will find 45000 graves of Jews who died in the ghetto and nearby some empty graves that were digged by the Jews for themselves as they were forced by the Nazis. As the Soviets were advancing too fast, the graves remained unused and are left there as a reminder.

Although we were not really impressed with Piotrowska street, it would be a sin not to mention it. It’s the main pedestrian street in Łódź where all the life is. It’s almost 5 km which makes it the longest pedestrian street in Europe. If you expect no cars, you’re gonna be disappointed just like we were.

There are quite a few sculptures there as well as the Walk of Fame to honor the Polish pearls in the business like Roman Polański.