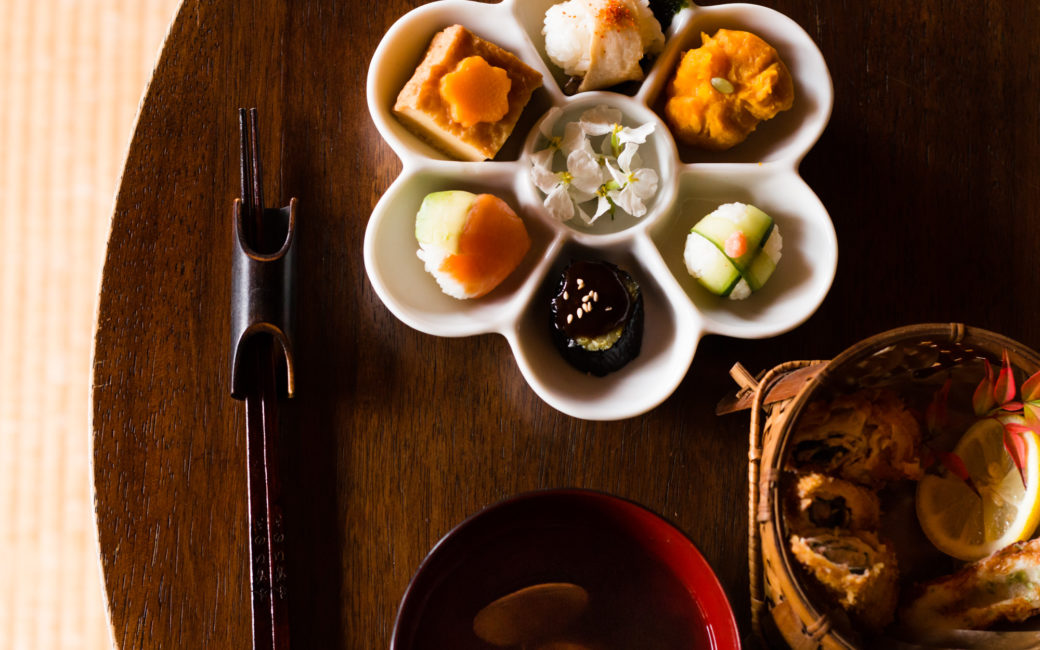 Flavors in Japan won’t punch you in your face like in Korea, won’t knock you off your feet like on Sri Lanka but they will slowly charm you with subtle flavors. That’s what happened to us and we are completely hooked.

Japan presented us with new ingredients but it also gave us a new concept of a meal. We discovered how great it is to eat a tiny bit of everything. Enjoying bite after bite, each flavor seems more intense and new… and you end up eating less!

Or simply seaweed. Before Japan I always thought it was only used to roll sushi but little did I know that it was the best snack at any time. Not to mention what a great addition it is for any meal as well 🙂 Almost like chips but than healthier and so much more delicious!

No meal could be complete without a bit of miso soup. It’s such an easy soup based on miso paste which is made of soy. What goes in there is pure creativity of the chef, Chinese cabbage, mushrooms, maybe some seaweed. Everything's allowed. The taste is not comparable to anything, pure umami goodness that brings warmth and joy to your body.

After miso soup, pickles are the most important part of every meal. I have never seen such a variety of sour goodness. There are daikons, plums, cucumbers, eggplants and whatever else you could imagine. It’s something that has been around for ages as one of the easiest methods to preserve the food. I was shocked by how many different techniques there are, pickles can be made with miso paste, vinegar, roasted rice bran or humble salt.

Jandirk got especially addicted to it. It's definitely something only a few people can like as it’s this weird combination of sweet and very spicy.

Okonomiyaki are kind of pancakes made on a hot plate that hero cabbage and batter. We especially loved the ones that put you straight into a food coma, with bacon, egg, shrimp, lots of soy sauce and shavings of smoked bonito. People on a diet can downscale their choice a bit and go for a bit more basic option...

Takoyaki are decadent ball pancakes stuffed with octopus and topped with a decadent sauce and smoked bonito shavings. They reminded us a lot of okonomiyaki but because of their small size they seem a bit less unhealthy. There is not a single food market or event in Japan without them so don’t worry, you won't have to search.

Japan is associated with raw food, sometimes I feel like half of the world thinks that it’s all there is. It’s not but it is a big part of the culture. What most people don’t realize, it requires a lot of technique and finesse to put a great sushi together and to slice the sashimi to perfection. With quality comes the price so we haven’t eaten much of the fancy sushi or sashimi. But I have to admit that what is sold in some belt restaurants or even some supermarkets is just to die for!

It’s just a humble broth put on a little stove at the table. But that’s the whole beauty of it. It’s like pure Christmas. Everyone sits around the table and dips in whatever they want. It can be pork, Chinese cabbage or spinach. At first it seemed a bit weird to get raw ingredients and cook your own meal at the table. Especially that that's what you get in a restaurant as well. But it's just pure fun and such a beautiful experience to share. At the very end when the soup is almost finished, you throw beaten eggs in there with some rice and eat that. So don't forget to leave some place for those last bits. So simple and so delicious!

Those buckwheat, thin noodles are Japanese natives. Low price, fast serving time and enormous variety makes them a perfect backpacking meal for every taste. It seems to be a bit of a Japanese fast food option.
The best soba we had was in Hakone. Perfectly thin, al dente, it was so good that many people ate just the noodles without the broth. It’s popular to dip them in some yam paste with raw egg. As weird as it sounds and as slimy as it is, it’s delicious. In a country with no cheese that’s as close as you will ever get to indulgent and creamy.

Everything tastes better with sake. It’s a drink that could accompany every single meal. Dry, mild, cold one by the dinner, warm, sweet one by the dessert. Not to mention the one with rice particles could be the dessert on it’s own.

We have been tea lovers all our lives but Japan got us addicted to green tea. We started drinking liters of it, hot and cold. Not to mention the very bitter, intense matcha that we were seeing and tasting everywhere

Comes in a variety of forms and uses. It can be soft or hard and watch out… it can be even deep fried. The last one is sliced very thinly and deep fried twice. It looks like many sheets stacked together and its fluffy and airy. To be quite honest I didn’t know it was tofu when I tasted it and even less that it had anything to do with oil. I naively thought it was healthy…