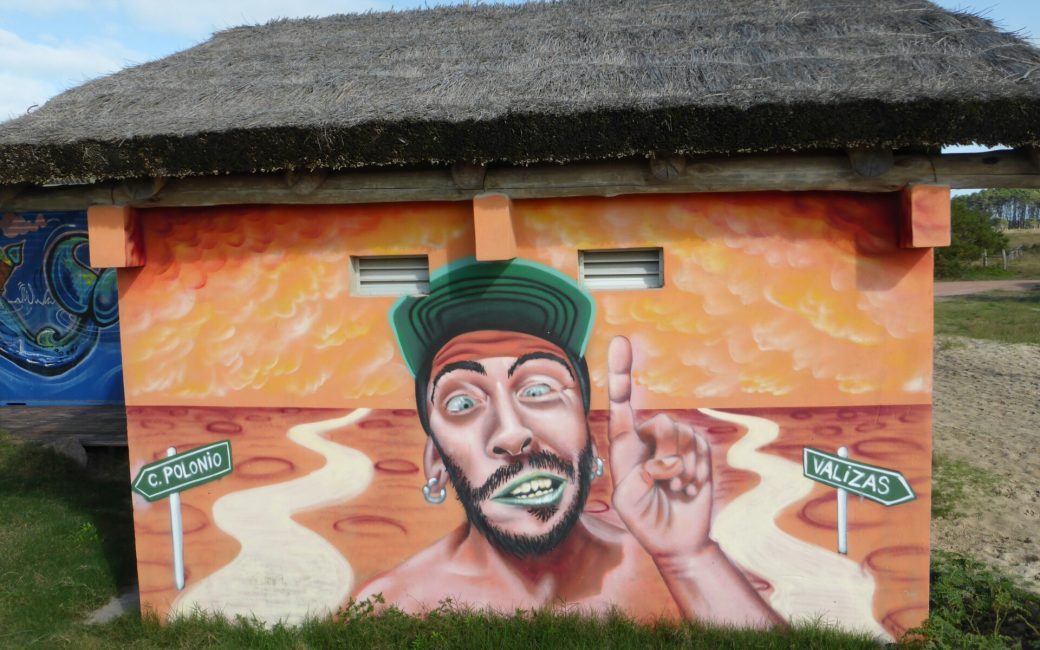 Uruguay is definitely not a cheap destination especially in high season so between December and the beginning of March (busiest month is February). We were there in May/June so in a bit of a dead season when accommodation is cheaper and the beaches are empty. In total we spend 1538 euro (so 46 363 pesos, 1 euro was 30.15 pesos for us) for us both during 29 days so 26.5 euro per day per person.

Where did we go?
We went through the whole coast of Uruguay starting in Montevideo and ended in Chuy. We visited Colonia del Sacramento for a day trip and later we stayed in Punta del Este, Punta Rubia, Cabo Polonio and Punta del Diablo.

Where did we stay?
Mostly dormitories in hostels except for Cabo Polonio where we stayed in a double room (it was 700 Uruguayan pesos and bed in a dorm was 300 per person) and Punta Rubia where we had a double room with a private bathroom (35 euro per night).
Bed in a dormitory: around 300- 450 pesos (10-15 euro) per night

What did we eat?
We mostly ate meals prepared by ourselves but we didn't save on ingredients (so no instant noodles!:)). Generally fruit and vegetables are cheap compared to western Europe. It gets more expensive when you want to buy processed food and chocolate is like gold among all the sweets. We also didn't deny ourselves a nice bottle of Uruguayan wine from time to time.
Good uruguayan wine: 200-300 pesos (7-10 euro)

How did we travel?
By bus with joy! Buses in Uruguay are comfortable, punctual and cheap. Often they even have WiFi. Our budget includes also our tickets to Brasil (also by bus).
For example: bus Montevideo to Punta del Este (130 km)- 489.83 pesos (16.25 euro)

What else did we spend our pesitos on?
Entrances fees, tip for "free" walking tour, laundry. Definitely nothing fancy.

Our tips to save money in Uruguay
1. It's better to travel out of season when accommodation is at least half the price and you can actually travel without booking it in advance (often we were booking hostels one or two days before).
2. Wash your own clothes. Laundry is really expensive, in Montevideo we spend 480 pesos (16 euro) on one quite big bag of laundry(!) In Punta del Este for a small bag they wanted to charge us 250 pesos (8 euro).
3. Travelling out of season be prepared for things to be closed.. Uruguay doesn't have many citizens and most of them live in Montevideo so going further in the coast most of the houses are empty and supermarkets closed. There is also no possibility to withdraw your money so unless you don't want to travel for an hour only to get to the ATM make sure you withdraw all you need in Montevideo or Punta del Este.
4. Not only booking.com, hostelworld.com and airbnb are handy! if you want to go to Cabo Polonio you won't find many hostels on those. Go to Portal del Cabo. There you find more options and for all the budgets. It's better to contact the hosts by phone as they don't have easy internet access.
5. Try to pay by card - in many places you get small discounts for paying by card. Always nice to have some spare pesitos:)

If you have any questions or you would like to take a look on our spreadsheet, let us know:)

3 thoughts on “How much does it cost to travel in Uruguay? Our budget and tips”