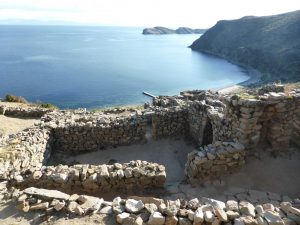 Going to Copacabana on the coast of Lake Titicaca we were expecting extraordinary ruins, ancient civilizations and beautiful views. What we got were tons of restaurants, propers, ugly buildings and ruins that were far from impressive. But at least climbing on the surrounding mountain provided us with a decent exercise and quite good views of the city.
But no-one goes to Copacabana for the city itself and neither did we. And so we took a boat to Isla de la Luna. On our way we were very focused to keep our heads out of the windows as the whole boat was filled with fumes from the motor of the boat. Possibly the sailor wanted to poison us. Anyway he didn't manage and we reached the island just fine (not counting our stops in order to try to sell more tickets). Time in Bolivia is very relative and so when we reached the island our captain didn't feel like waiting for 2 hours before going to the next one anymore. Kindly he gave us 45 minutes. Running through the tiny island we managed to see it's only monument Temple of the Virgins of the Sun. Magnificent ruins where years ago little girls of around 8 years old were brought to learn weaving, cooking and everything that would be necessary to became a concubine, wife or a sacrifice.

From over there we went to Isla del Sol without buying anything from local ladies which they were not so happy about. As soon as we entered Isla del Sol we had to pay an admission to be allowed to walk on that sacred ground (just like on Isla de la Luna and everywhere else where the Bolivians think they could possible charge for walking). On Isla del Sol we started our 16 km by climbing probably a million stairs, or at least that's how it felt. Escalinatas de Yumani which led us to Inca gardens was probably secretly built to slow all the armed Spaniards down...
The rest of our walk seemed rather easy even though we had to go through people's gardens in between their lamas and donkeys as we lost our way. Going to the north we passed a small village called Challa which by Lonely Planet is compared to Greece because of it's "white beaches". Now we know for sure that the person that wrote it was either never in Greece or never in Challa. But after 14 km we were very rewarded with a charming, small village of Challapampa in the North. Pretty little beaches seemed not to be ment for people as there were mainly pigs and sheep enoying their time. After leaving our sleeping bags and other unnecessary things we went a bit further to see where the sun was born according to the Incas. And we were stunned.... Chincana turned out to be one of the most impressive ruins we have seen so far. Huge with many rooms it showed us that the Incas really knew what's best... Fancy room with a view of course. View on the lake. Spectacular.... Now we are looking forward to what Peru has to show us:)