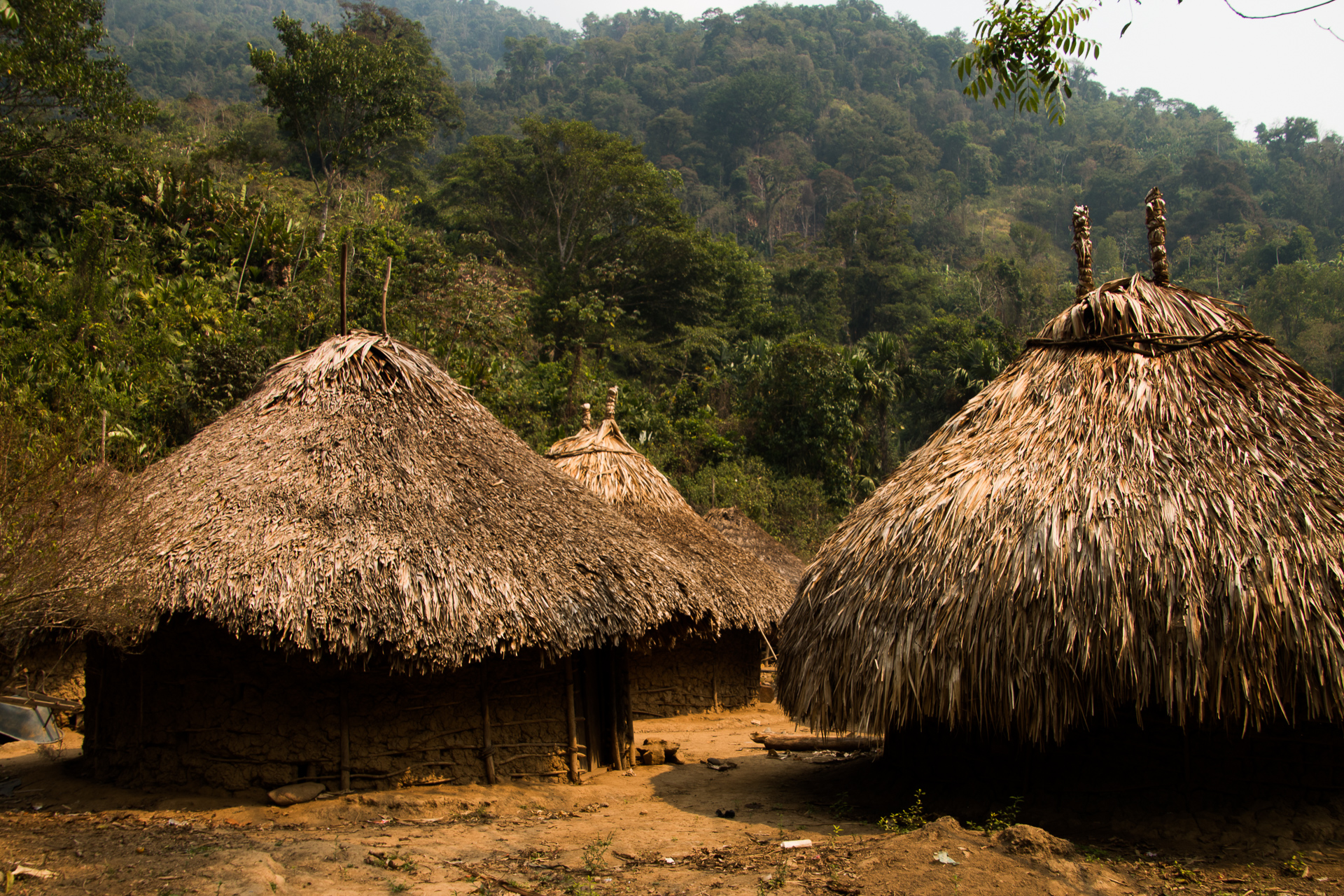 The Lost City is the Machu Picchu of Colombia. The Tayrona people left it in the jungle, after being conquered by the Spanish, to be forgotten till the 1970s when it was rediscovered by grave robbers. Still we were hesitating if we should go to see it as the pictures of the main square didn't look like anything more than just circles, stone rings. In the end we got convinced by a big discount that I got for translating during the tour as obviously the guide spoke only Spanish 🙂
And there we were walking in a world of pain to the Lost City. It was 1 pm when we started the walk through the mountains without any trees or clouds. The sun was excruciating and we were sweating like pigs. The sweat was literally dropping even from my hands. It was so hot that even mosquitoes were not interested in their walking prey. I was already thinking that I seriously underestimated this hike as I thought after Salkantay and Choquequirao this would be a walk in a park. Only the indigenous kids were full of energy and motivated to pose for sweets from tourists. Obviously I didn't join that tradition, I don't want them to be teethless from that everyday- Halloween- sugar. Although there are three tribes living in the area we mostly saw Kogis, indigenous people who are directly descended from the Tayrona people or so they claim. They live in traditional huts made of wood and palm leaves but cell phones and pesos are already well known wealth that tourism brought to them. So it's hard to say how much of their tradition is still really alive. Along the way we heard about other Kogis communities living higher in the mountains, that are isolated from the foreign money and culture but since we haven't seen them, we can't judge.
Apart from the communities along the way we also saw some spectacular views, high mountains, rivers, natural swimming pools and dense jungle. Our campsites were not a part of that spectacular scenery but they were OK. The main rules were: to take a shower before going to bed and not to put any backpacks on the bed. All of it to keep the beds as clean as possible because no one will change the sheets after every person...or 2nd or 3rd... Or maybe ever. Every time I went to sleep I could smell sweat from the sheets and I was hoping that no bed bugs were in there waiting for me. Gladly I was lucky. Also because I didn't get hardcore food poisoning during the hike. Judging by the look of the toilets (got almost sick from looking) and sinks (of course people vomit there, why would they do it on the grass??!!) at least half of the people got very sick. Some didn't even see the ruins. Well at least not live... Thankfully JD and I were doing quite okish and so we were able to climb those 1200 stairs to reach the top. And it was worth it. The ruins were just breathtaking!! Huge, stone constructions, arising from the jungle. I can imagine it was hidden and forgotten for so many years. And the mystical atmosphere surrounding it. We could hear the birds and the nature was truly singing. We were not alone but the few people that were there got spread through the ruins and disappeared between the terraces. Just us, the ruins, nature and... a few young soldiers with huge guns. Good that it's all safe now because if someone would like to kidnap us (and it happened already in 2003 with a group of tourists and their guide) I don't know if those tiny boys with big guns would know what to do actually.
The Lost City left us thinking what else might be hidden in the dense rainforest in Colombia or maybe in the Amazons. Maybe there are still civilizations to be discovered... It would be history rising in front of our eyes.