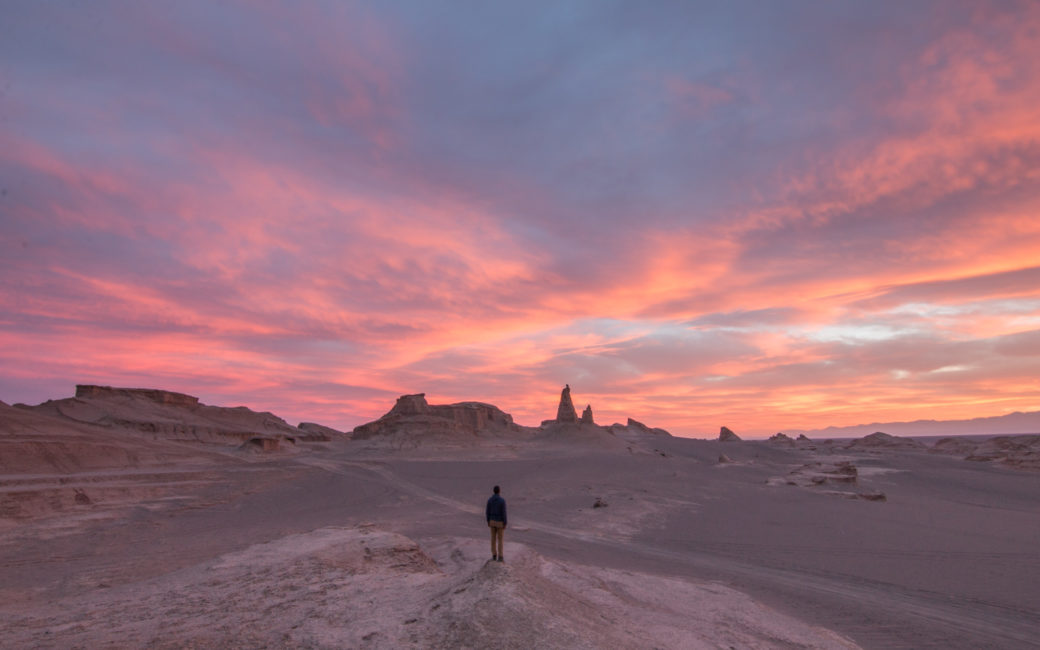 Kalout desert was our favorite sight in whole Iran. We are always more than happy to skip the crowds and in the Kalouts it’s not even a challenge. There we could feel like tiny ants in the big world, surrounded by all this giant rocks shaped by erosion.

How did we get there?

We didn’t really dare to rent a car in Iran but that would definitely be an option. Instead we organized a tour going from Kerman which is the most popular way of going to the desert. The guides have pretty varied prices and some of them are pretty open to negotiation so it’s worth giving them a call to find out the details. I preferred to call them also to check out their English … quite many of them couldn’t respond my basic questions so it was clear they wouldn’t be able to respond more complicated ones out there in the desert. In final end we went with Ali from Visit Kalouts.

How much did it cost?

We paid 150 euros for us both which wasn’t the cheapest but pretty close to it. We were really satisfied with our guide Ali, his English was good, he was friendly, patient and happy to explain everything. We chose him because we felt his company had the best idea of what there is to see around the desert and the most organized plan. Others seemed just to want to drive through without much plan.

Practically everything, transportation, food, accommodation in a rather basic house (2 days, 1 night), flexible schedule. If we wanted to stay somewhere longer, sleep longer or wake up in the middle of the night, it was all possible.

What did we see?

Except for the amazing giant stones shaped through erosion we saw how the people in the desert lived. How they dealt with water, their water system and reservoir and even a salty river. Yep plenty of water in the desert.

Initially we didn’t plan to visit Kerman, we just wanted to skip it and use it just as a stop to get to the Kalouts but after our tour we still had a bit of time before the night bus and Ali and Shiva (Ali’s colleague) proposed to give us a little tour. So we walked around the main square, the bazaar and local library. We realized that the place had much more to offer than we initially anticipated. It was quite pretty and had one hidden gem. A tea house opened in an old bath house in one of the corners of a bazaar labyrinth. Sitting there surrounded by all the beautiful tiles, Iranian carpets and even a fountain we were just wondering how come all of the people love the heating so high. We were literally melting away. I guess it was another way to imitate the weather like if it was summer.

At some point we got hungry and wanted to order food but it turned out to be impossible because they only served lunch and it was already after the time. But impossible in Iran can be solved … with money I guess. So we met a nice Iranian man that lived all his life in Holland and described himself as an almost royalty in the region. His new friends couldn’t walk around hungry so he disappeared for a few minutes and came back inviting us to the restaurant part of the place. We got served whatever we wanted and the food was delicious. We were a bit hesitant when we were walking up to the counter, we thought we might end up paying for reopening the restaurant but the meal was actually really cheap. Power of money and connections in Iran…