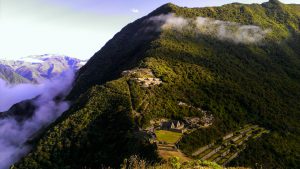 „What did you like the most?” is THE question everyone asks us. So here we go, our top 10 of South America (and a tiny bit of Central). And all of these ten places we loved differently but equally as strong.

1. Off the beaten track to Choquequirao

That hike was absolutely the number one among the hikes for us. It was hard, painful but truly magical. While Machu Picchu is a beehive full of tourists, where you can’t walk around freely, it’s noisy and you can forget about peeing for some time, Choquequirao is peaceful and mystical. There are almost no people and the site is way bigger then MP so we could walk around freely and we saw just 3 people during the whole 1.5 day of walking around (yeah that’s how long it takes to see it). It’s also for only 40% excavated so the stones and terraces disappear in thick vegetation. When I even start to think about it I would like to go back and do it all over again.

The immense glaciers in Calafate were definitely one of a kind. The tourist attraction number one, Perrito Morreno, was breathtaking, huge and looking at the pieces breaking off was better than a football match. And it’s not so touristic in the winter…:) The Titanic-like pieces of glaciers floating around were just surreal to see, a bit like islands of blue ice in the middle of nothing. And hikes near Chalten where you could just walk around and see dry glaciers just like that was stunning!! I even miss the cold when I write it.

3. Under and above water wonders of San Andres and Providencia

Well, in San Andres we didn’t see any wonders except for garbage and general chaos. But Providencia was all we were hoping for and more!! Gorgeous beaches, water in 50 shades of blue and FOOD!! Everything we tried there was absolutely delicious and it was definitely the best we ate during our trip (except for super fancy restaurants in Lima). The best of it all was the diving: sharks, stingrays, crabs, families of fish and all just sooooo close and soooo many.

4. Warmth of the people and originality of the coast of Uruguay

Without a doubt people from Uruguay were the most educated of all nations we met. They knew so much about history of any country including Poland that I wish I could send all my future babies there for school. Not to mention people were genuinely interested in us and wanted to talk and talk and talk and … drink mate:) The coast has obviously stunning beaches with mostly hippie architecture (recycle houses, Heineken bottle floor etc) and cute little penguins and sea lions. In September you can also spot whales.

5. The Lost City of Tayrona

Simply incredible! When I googled it I was really not impressed but live, it’s another story. It’s immense, breathtaking and magical:) it’s so surrounded by thick vegetation that it gave us a feeling of a hidden place worth all the sweat and pain during the hot, dusty trek to it.

6. Charming little frogs and nature in “Mouth of the Bull”- Bocas del Toro

From Bocas we didn’t expect much since it’s very touristic. But we were positively surprised. Our hostel was so cute, charming and comfy, food was delicious and little red-dotted frogs stole our hearts. Not to mention we saw a huge boa and stunning green forests everywhere. And that’s just because we didn’t stay on the main island but went to Bastimentos.

7. Lakes and mountains around Bariloche

Even though when we were there it was covered in ash after a volcano exploded in Chile, it was an amazing region to see. The town itself looks just like a Swiss mountain village so nothing too special. But the surroundings!! Insane!!! Lakes and mountains everywhere and really many! In between them forests. Pure nature.

8. Kayaking adventures in the Amazon

That was probably the craziest thing we have done. Observing crocodiles not even from a distance actually:P fishing piranhas all the time, getting bitten by all those crazy mosquitos and all that accompanied by noise from all types of monkeys. To fall asleep in that chaos of nature with stars above our head and fireflies was really one of a kind. Just priceless.

9. Wine drinking and colorful mountains in the North of Argentina

If we lived in Cafayate we would become alcoholics! And that drinking different wine every day (yep there is plenty). Not to mention really close from the wine there are colorful mountains and canyons.

10. The villages in the coffee region

Those stole our hearts. Calm, colorful, green and the locals were as colorful as the houses. Warm and friendly. We found one of the best hostels to volunteer in and definitely the best Airbnb. We made friends that hopefully we will see again. We even started drinking coffee :).